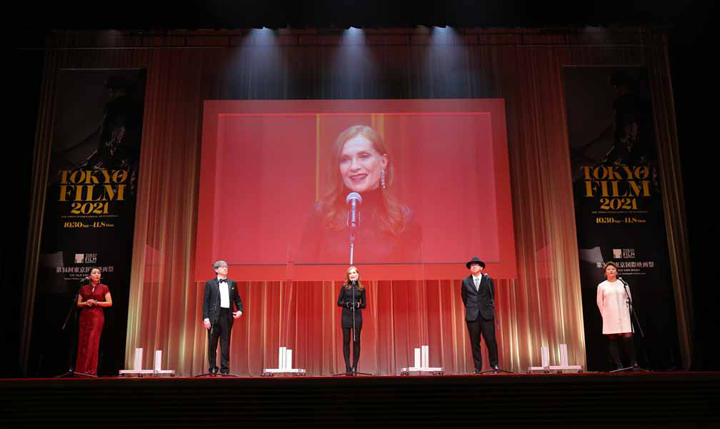 And so begins the 34th Tokyo International Film Festival

It’s early fall in Tokyo, and on October 30, the 34th Tokyo International Film Festival (TIFF) finally opened. Clint Eastwood, we’ll learn later, wouldn’t be able to do that. But Isabelle Huppert, the great French actress, was there to honor the red carpet and be the president of this year’s jury.

Aoyama is a filmmaker and novelist. In 2000, his film Eureka was part of the Cannes Film Festival, where he won for him both the FIPRESCI Prize and the Ecumenical Jury Prize. In 2011, his Tokyo Park won the special Golden Leopard award at the 64th Locarno International Film Festival.

Chris Fujiwara is a film critic and programmer. He is the author of books on cinema. I had the honor of working with him as a mentor for the Yamagata International Film Criticism Workshop, during the last pre-pandemic edition of Cinema Rehiyon in the city of Naga, Camarines Sur.

Sebu is a composer who studied, outside of her academic stay at the Ecole Normale de Musique in Paris, with the Oscar-winning French composer Gabriel Yared. She is known for her work on Arc in 2021 and Final Fantasy VII Remake in 2020.

Lorna Tee is a Pan Asian film producer and also an organizer of film festivals. She has been sailing in Europe and Asia after having worked for Focus Films of Hong Kong, Irresistible Films of Hong Kong and Japan, and the Berlinale, among other engagements. She runs her own production company Paperheart (Malaysia), which aims to produce films across Asia.

Legendary is already the order of TIFF and any international event organized by the Japanese in Japan. The celebrities had to walk to the end of the carpet, which was at the bottom of a spiral staircase. They had to stand there and had to wait for the guide to wave them up the stairs. Once seen by the hosts, they were then introduced and another guide, white-gloved hands (not a measure against the virus but the most formal sign of welcome) led them towards a wall. A woman this time carried a tray on which were placed two or three (depending on the number of the production team represented) of the wireless microphones. These were handed over from left to right. No deviation from this order.

Due to the pandemic, according to organizers, safety measures and other rules must be observed during all physical screenings, question-and-answer sessions, master classes and the series of conversations at the Asia Lounge, which takes place. will all be held in TIFF’s new premises in Tokyo’s Yurakucho -Hibiya-Ginza district. The old place was in Roppongi. Some question-and-answer sessions will be held online to welcome filmmakers who are abroad; many other events will be broadcast live. The festival will screen 126 films physically, including outdoor screenings. Fifteen titles are competing for the Tokyo Grand Prix as part of the international competition, including 10 world premieres, among 1,533 entries from 113 countries and regions.

Other luminaries who graced the opening ceremonies were: director Yukisada Isao, actress Watanabe Makiko and Andrijana Cvetkovikj, former Ambassador of the Republic of North Macedonia to Japan, who are part of the jury for the Amazon Prime Video Take award One; director Ishii Yuya, who is part of the jury for the Asian future; and three major film festival directors: FrÃ©dÃ©ric Boyer (Artistic Director, Tribeca Film Festival), Christian Jeune (Director, Film Department / Deputy Managing Director, Cannes Film Festival) and Carlo Chatrian (Artistic Director, Berlin International Film Festival) . They will be speaking at the World Cinema Conference: The Future of the Film Industry.

Inside the Tokyo International Forum, the opening ceremonies began with a live performance by the Women Orchestra Japan playing a mix of songs from beloved films.

New TIFF Festival President Ando Hiroyasu, welcoming the audience, explained how the organizers had been “on the edge of our seats until the very last minute, wondering if we would be able to organize the film festival this year. But today, the pandemic has subsided, and we are delighted to be able to welcome so many people at the opening. “

TIFF also announced its new programming director, Ichiyama Shozo. Japanese Prime Minister Kishida Fumio appeared on video, commenting on how, in the midst of this pandemic, he would like to “express my gratitude to all of you for your ingenuity and dedication in organizing this new kind of festival. of film, a hybrid of the real and online.

The course buzz of the night was about the opening film, Cry Macho, and its filmmaker, Clint Eastwood. The evening turned out to be a tribute to the actor who was celebrating his 50th birthday as a director, which began in 1971. Steven Spielberg, Mel Gibson and Hilary Swank also appeared onscreen to talk about the legacy. from Eastwood.

Then a letter from Eastwood himself appeared on screen. â€œHello Japan,â€ he began.

Eastwood explained how, through this film, he could deliver his interpretation of â€œreal strengthâ€. He ended his speech with this line: â€œCry Macho was shot during the pandemic, and I hope this will be one of the films that will bring courage and strength to the film industryâ€¦â€