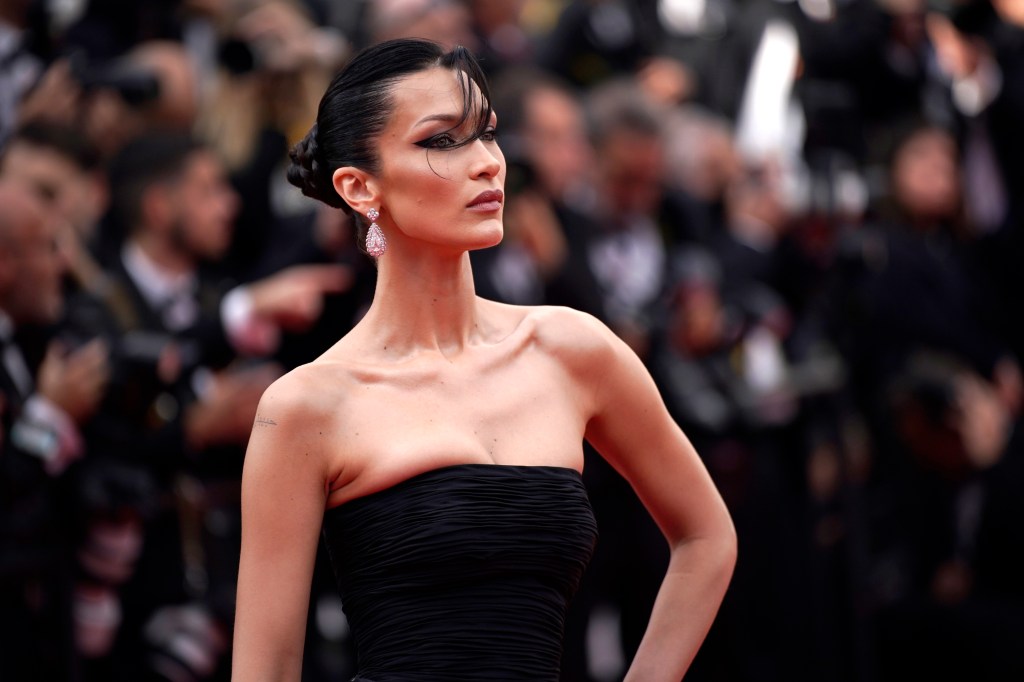 The 2022 Cannes Film Festival had no shortage of standout fashion moments like Anne Hathaway, Bella Hadid, Elle Fanning, Kristen Stewart and many more.

Many celebrities gathered to celebrate the 75th anniversary of the annual film festival, showing off their designer looks on the event’s famous steps.

Hadid, who has long been a staple of the Cannes Film Festival red carpet and is known for her memorable fashion moments, left her mark on Tuesday wearing a vintage Versace black draped gown designed by Gianni Versace for his Spring 1987 collection.

Launching her film “Armageddon Time”, Hathaway also impressed many Cannes audiences, especially for her custom Armani Privé white sequined column dress with matching train that she wore during the screening of the film.

As the 2022 Cannes Film Festival slowly draws to a close, WWD takes a look at some of the most notable fashion looks from the past week. Read on to find out more.

Bella Hadid is no stranger to the Cannes Film Festival red carpet, regularly wearing striking looks that have remained in the cultural lexicon. Take last year when she wore an edgy Schiaparelli dress accented with a gold brass necklace in the shape of trompe l’oeil lungs from the fashion house’s fall 2021 couture collection.

This year, however, Hadid went the vintage route with her red carpet look. Hadid walked the red carpet on Tuesday in a vintage black draped dress from Versace’s Spring 1987 collection, designed by Gianni Versace himself.

Cara Delevingne was another model who had a standout fashion moment at the Cannes Film Festival on Tuesday, wearing a custom Balmain gown with a pointed strapless top and sheer cutouts. Delevingne walked the red carpet alongside Balmain’s creative director, Olivier Rousteing.

As a member of this year’s jury, director and actress Rebecca Hall experienced several standout fashion moments during the 2022 Cannes Film Festival. One of those looks debuted on Monday night when Hall walked the red carpet dressed in of a custom rose gold sequin dress adorned with Prada crystal embroidery.

Kristen Stewart attended the premiere of her upcoming film, “Crime of the Future,” on Monday wearing a two-piece look from Chanel’s spring 2022 couture collection. The look consisted of a beaded, long-sleeved crop top paired with a draped white silk skirt.

Naomi Campbell wowed Cannes audiences on Monday at the screening of “Decision to Leave” when she walked the red carpet wearing a black feather-embellished dress and a plunging neckline from Valentino’s spring 2022 couture collection.

Regularly featured in Balenciaga campaigns, French actress Isabelle Huppert naturally turned to the design house for the Cannes Film Festival. For the premiere of “Forever Young” on Sunday, Huppert wore a bright green draped dress and bodysuit with matching gloves by Balenciaga.

For the premiere of her HBO series “Irma Vep” on Sunday, Oscar-winning actress Alicia Vikander wore a custom Louis Vuitton dress. Vikander’s dress has been hand-embroidered with copper metallic sequins and sequins. She paired the look with Louis Vuitton fine jewelry.

Anne Hathaway enjoyed several standout fashion moments throughout the 2022 Cannes Film Festival, including the custom Armani Privé look she wore to the premiere of her film “Armageddon Time.” Hathaway’s look was a crop top and skirt made of white sequins and featured a train.

Another star known for her exceptional outfit on the Cannes red carpet, actress Elle Fanning made her return on Wednesday in a bespoke dress from Armani Privé. Fanning’s blush-toned dress was embellished with sequins and featured a tulle skirt.

For the premiere of “Top Gun: Maverick” on Wednesday, Eva Longoria stood out on the red carpet wearing a dress adorned with a silver mirror by New York designer Cristina Ottaviano.

For opening night, British actress Lashana Lynch kicked off the festival with a bang on the red carpet wearing a Fendi hand-embroidered jacquard dress from the fashion house’s Spring 2022 couture collection.

Additionally, on opening night, actress Julianne Moore also wowed Cannes audiences by walking the red carpet in a low-rise, low-cut, low-neck dress by Bottega Veneta. She paired the custom dress with Bulgari jewelry, including a necklace dubbed “the homage to Paris,” which is meant to pay homage to the city’s culture. The necklace features a 35 carat emerald in the center.

All the looks to see from the Cannes Film Festival 2022

Riley Keough on Directing, Nepotism and Crying During “Elvis”

Sabrina Elba Opens Up About Her First Acting Role, Activism & Not Working With Idris