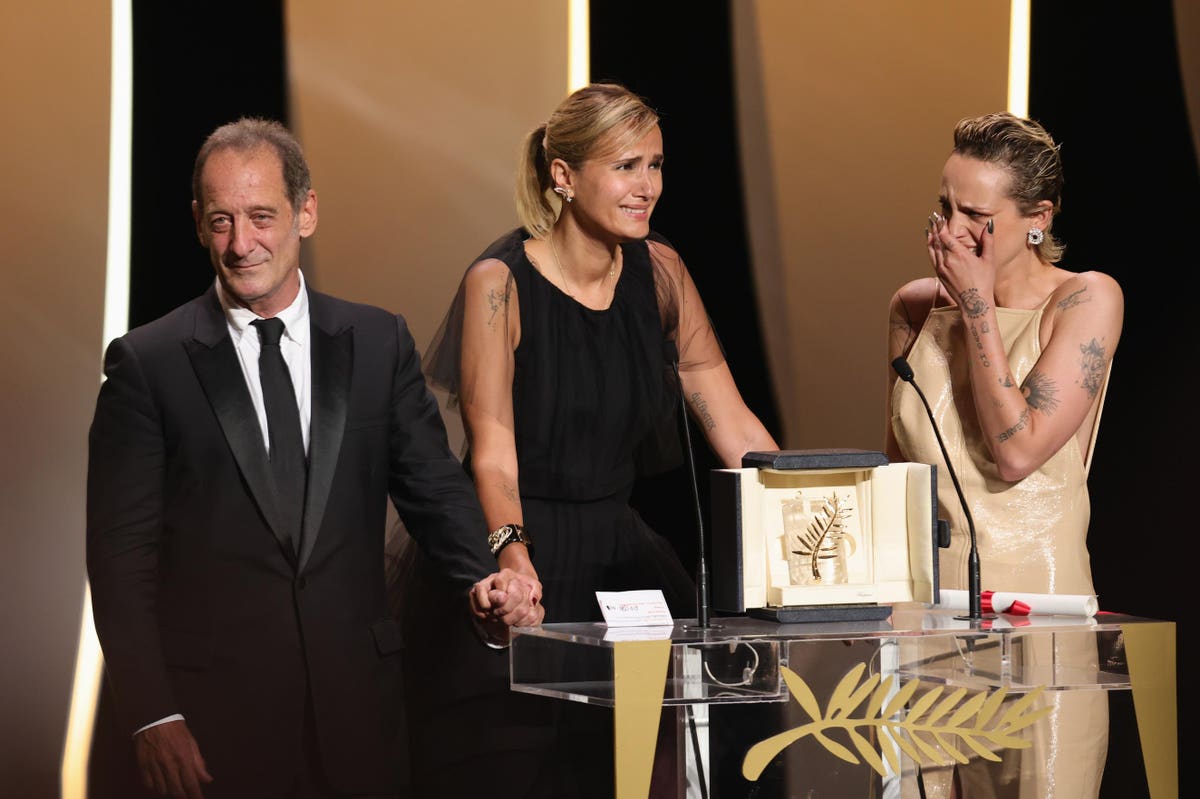 The 74th Cannes Film Festival wrapped up on the evening of July 17, 2021. Taking place two months later than usual, this year’s film festival was highly anticipated after last year’s cancellation. After viewing the 24 feature films in Competition, the jury, chaired by Spike Lee, who almost revealed the Palme d’Or winner too soon, presented the prizes at the Closing Ceremony.

During the closing ceremony, Italian director Marco Bellochio received an honorary Palme d’Or for his extraordinary career as a filmmaker. The audience gave Bellochio a standing ovation, another of the many very long ovations from the masked audience at this festival. Imagination and courage are the two essential ingredients in making films, Bellochio said accepting his award. Jodie Foster also received a Palme d’Or d’Honneur for her incredible career at the Opening Ceremony.

The winner of the Palme d’Or 2021 becomes the second director to win the award. Only four female directors, out of the 24 films, were selected in Competition this year.

The Palme d’Or, presented by Sharon Stone, was awarded to Titanium directed by Julia Ducournau. By winning, Ducournau made history by being the second woman to win the Palme d’Or in 74 years. Jane Campion won the coveted award in 1993, together with Chen Kaige.

The two main actors, Vincent Lindon and Agathe Rousselle, joined Ducournau on stage as she accepted the award. The film caused a sensation during its screening, praised by some, while strongly criticized by others who qualify it as â€œmonstrousâ€ as Ducournau emphasizes.

Titanium is Ducournau’s second feature film, after his first body horror feature Raw. Titanium was considered by critics as one of the most shocking and violent films selected in Competition this year, and has been compared by many to that of David Cronenberg crash. In his acceptance speech, Ducournau wished for more diversity and inclusiveness.

The Grand Prize, awarded by director Oliver Stone, this year rewarded two films: that of Asghar Farhadi A hero and Juho Kuosmanen Compartment n Â° 6. A hero tells the story of Rahim, imprisoned because unable to repay a debt. Amazon Studios acquired the US rights to the Iranian film. Compartment n Â° 6 is an adaptation of the novel written by Finnish author Rosa Liksom. Kuosmanen won the Un Certain Regard award for his first feature film, The happiest day of Olli Maki’s life, in 2016

Caleb Landry Jones won the Best Actor Award for his role in Nitrame, directed by Justin Kurzel. The film is about the Port Arthur massacre in 1996 in Australia.

Renate Reinsve won the Best Actress Award for her role in Joachim Trier The worst person in the world. The film follows Julie’s existential crisis as she turns 30.

The Jury Prize was also awarded to two films: Ahed’s Knee (Ahed’s knee) directed by Nadav Lapid, and Memory directed by Apichatpong Weerasethakul with Tilda Swinton and Jeanne Balibar. The award was presented by Rosamund Pike in perfect French.

Leos Carax received the Best Director Award for his musical Sparks Annette with Adam Driver and Marion Cotillard. The award was accepted by Ron Mael and Russell Mael of the Sparks group, who co-wrote the screenplay. The film will be released on Amazon Prime, in theaters August 6 and digitally on August 20.

The Best Screenplay Award, presented by director Andrea Arnold, went to RyÃ»suke Hamaguchi and Takamasa Oe for Drive my car. The film is a three-hour adaptation of a short story written by Haruki Murakami.

The Un Certain Regard 2021 ceremony, a section dedicated to discovering emerging filmmakers, took place the day before, on July 16. The Un Certain Regard Section Jury was chaired by director and screenwriter Andrea Arnold, and was made up of five other jurors, director Mounia Meddour, actress Elsa Zylberstein, director Daniel Burman and director and actor Michael Covino. The Un Certain Regard Prize was awarded to Kira Kovalenko Razzhimaya Kulaki (Loosen fists), a Russian drama with an â€œexplosion of originality, physicality and feelingâ€ according to Andrea Arnold. The film was selected for distribution in North America, UK, Ireland, India and Latin America by MUBI.

at SÃ©bastien Meise Fat Freiheit (Great freedom), with Franz Rogowski and Georg Friedrich, received the Jury Prize. Austrian film, about a man who continues to be jailed for being gay, set in post-war Germany, was also purchased by MUBI for release in North America, UK, Ireland , India, Turkey and Latin America.

Hafsia Herzi Good mother (Good mother) received the Ensemble Prize. Teodora Ana Mihai’s first feature film Civilian received the Prize for Courage. Icelandic cinema Lamb, directed by Valdimar JÃ³hannsson, with Noomi Rapace, received the Originality Award. The US rights to the film were purchased by A24 and will be distributed by MUBI in the UK, Ireland, India, Brazil and other territories.

The Camera d’Or, for the best first feature film presented at Cannes, was awarded to Murina, directed by Antoneta Alamat KusijanoviÄ‡.