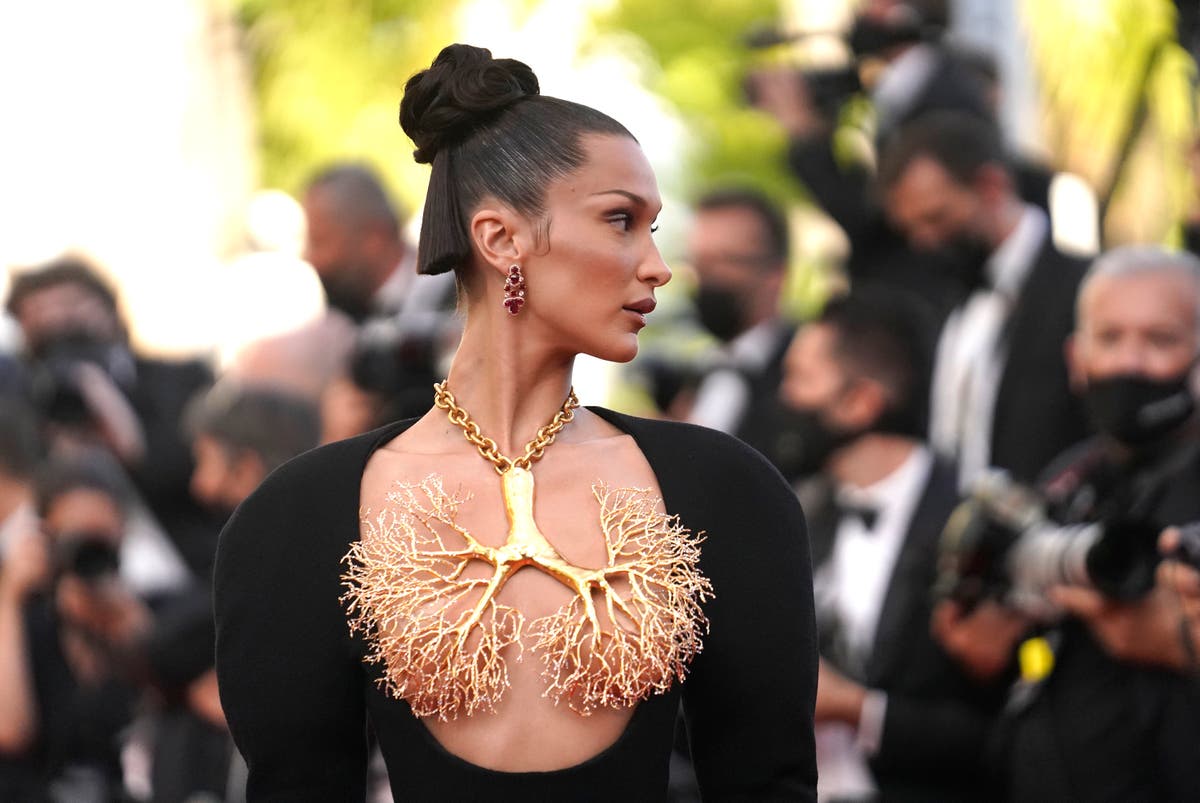 Cannes Film Festival: From Bella Hadid to Tilda Swinton – the most viral looks you might have missed

With the Cannes Film Festival closing (June 17), now is the opportunity to look back on some of the most spectacular outfits we have seen during the two weeks of the event on the French Riviera.

The festival had no shortage of megawatt celebrities, and they certainly got it into the fashion and beauty stakes …

Andie MacDowell made one of the biggest beauty claims in Cannes showing off her gray hair. She kept her curls loose and wild for this look, wearing a silver Prada column dress.

MacDowell spoke of letting her roots develop on The Drew Barrymore Show in February, saying she was convinced to take the plunge because her daughters told her she looked “badass.” This is the first time she’s shown it on the red carpet, although she would like to remind people that its color is “silver” – not gray.

Model Bella Hadid wore this unique Schiaparelli dress days after her Paris Haute Couture Week debut. It’s a dress that stands out, with a solid gold necklace made to look like delicate lungs or trees, worn over a structured black dress with assertive shoulders.

Frouf is still very much on the red carpet – just take this outfit from Sharon Stone. She leaned heavily on a romantic, princess vibe in a voluminous baby blue tulle dress from Dolce & Gabbana studded with decadent, colorful florals.

It would be hard to take your attention away from Jodie Turner-Smith’s dress: a glamorous white and yellow gown with feathers and a gem-encrusted bustier. And yet she was almost topped with the outrageous jewelry she wore – as the new face of Gucci fine jewelry, Turner-Smith wore a matching necklace, bracelet, and earrings with yellow beryls and diamonds, as well. than a brass knuckles in the shape of a heart. – ring shaped. It is jewelry that looks heavy and extremely expensive.

This is what fan fiction is made of: two style icons, TimothÃ©e Chalamet and Tilda Swinton, posing together on the red carpet (check out the memes if you haven’t already). The duo were in Cannes for Wes Anderson’s new film The French Dispatch and they certainly dressed for the occasion. At one event, Chalamet wore an iridescent silver Tom Ford suit with cream Chelsea boots, and Swinton wore Haider Ackermann – a designer who often works closely with the two actors. Swinton opted for an unusual color scheme: an orange skirt, a hot pink bolero, with green sequin sleeves underneath.

The model had a remarkable Cannes Film Festival. While not as unusual as her lunging outfit, this monochrome dress is just stunning. Vintage piece from Jean Paul Gaultier’s Spring / Summer 2002 haute couture collection, it was originally worn by Naomi Campbell on the catwalk.

There really couldn’t be more chic than Isabelle Huppert, especially when she wears an elegant black Balenciaga dress with giant sunglasses.