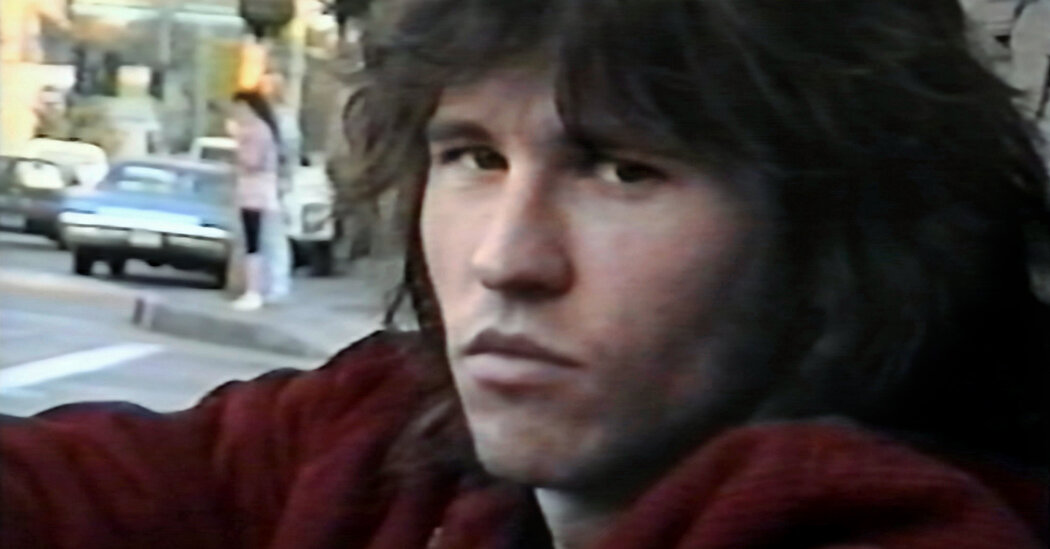 CANNES, France — As the documentary “Val” begins, a shirtless young Val Kilmer lounges on the set of “Top Gun” and claims he nearly got kicked out of every movie he’s done. Then Kilmer’s lips twist into a smirk. He does not play for sympathy. He is boasting.

At the Cannes Film Festival on Wednesday, two documentaries debuted about famous and prickly pop culture figures, but despite that promising first scene, “Val” would rather recontextualize the actor as a misunderstood softy. You may remember the stories of Kilmer, a major 1990s movie star whose career fizzled amid rumors that he was difficult to work with. Well, “Val,” directed by Ting Poo and Leo Scott, lets the 61-year-old actor tell those stories with more sympathy, in his own voice.

Or, to be more precise, the voice of his son Jack, who delivers the documentary’s first-person narration. Throat cancer has ravaged Val Kilmer’s signature purr, and Jack Kilmer, an actor, is an acceptable voice substitute who nevertheless seems much more easy-going than his father ever did. Kilmer has been recording since childhood, and over decades of home movies, he and his son paint a portrait of an underrated artist who always wanted to give it his all, even when Hollywood wasn’t interested.

Jack’s storytelling is so good-natured that it might take you a little while to realize that Kilmer dislikes nearly every movie on his resume that a fan might want to hear about. “Top Secret,” his first film, was “fluffy” in which Kilmer says he was embarrassed to appear, and he practically had to be gunned down to do the chauvinistic Tom Cruise movie “Top Gun.” On “Batman Forever,” Kilmer claims the studio machine thwarted his attempts to deliver a real performance, so he instead modeled his Bruce Wayne on soap opera actors.

All the while, Kilmer was recording elaborate audition tapes for Stanley Kubrick and Martin Scorsese, efforts to which “Val” devotes almost as much screen time as the roles he actually booked. Here’s the funny thing, though: Kilmer was a much better actor in the movies he hated! In the “Top Gun” clips, you see Kilmer at his most loose and playful because he doesn’t take anything seriously on film, but when we watch his “Full Metal Jacket” audition – or when he’s practicing lines of “Hamlet”, a dream role he never got to play on screen – Kilmer’s charisma calcifies and he becomes far too pretentious and pretentious.

So was he as dumb as they said? “Val” dodges the story of her stump out your cigarette on a cameraman or the “batman foreverdirector Joel Schumacher’s assertion that the actor was “psychotic”; here, Kilmer simply says he quit playing Batman because the costume was too strenuous. In a segment on the infamous 1996 flop “The island of Doctor MoreauKilmer describes himself as the serene moral compass of the troubled production; you’d never know a weary Brando threw Kilmer’s cellphone in the bushes and would have said“Young man, don’t confuse your ego with the size of your salary.”

There’s also a lot of talk about Kilmer’s romance and marriage to actress Joanne Whalley, though we barely hear him speak in any of Kilmer’s home video footage. After they divorce and he struggles longer with their children, the film lets his noble and wronged phone calls to Whalley play out almost in full. I would expect this undisputed view from a celebrity memoir. I’m not sure I’m buying it in a documentary.

By contrast, Todd Haynes’ new documentary ‘The Velvet Underground’, which also debuted at Cannes on Wednesday, is only too happy to confirm all the stories you’ve heard about singer-songwriter Lou Reed being a jerk. obsessed with himself. Like Kilmer, Reed claimed that anyone meeting him was simply interfering with his artistic process, but unlike “Val,” this film isn’t afraid to show how much Reed wanted to be famous and how resentful he was of the collaborators who could snatch the spotlight from him.

Reed died in 2013, and other important film personalities like Andy Warhol (credited with fronting Reed’s early career band the Velvet Underground) and vocalist Nico are long dead. Haynes isn’t interested in incorporating lots of stock footage to bring those lost voices to life; instead, this artsy documentary lets living members of the band, like instrumentalist John Cale and drummer Moe Tucker, do more of the heavy lifting.

“The Velvet Underground” is not a conventional musical documentary: for one thing, it uses hardly any performance footage, although some of the band’s most iconic songs, like “Candy Says” and “I’m Waiting for the Man”, often play in the background. Haynes is more invested in setting a mood, placing the viewer right in the middle of the mid-60s that produced seminal figures like Reed and Warhol.

And while Haynes is clearly a fan of his subject matter, he’s also not afraid to complicate that vibe. One of the film’s most beloved talking heads is the critic Amy Taubinwho recalls what was so alluring about the art scene of Warhol and Reed, then adds a prickly observation: if you weren’t pretty enough, Taubin argues, all those men ended up losing interest in you.

Let’s face it, famous people are narcissists: if you want to get famous and stay there, you pretty much have to. Haynes explores this concept in a way that “Val” can’t quite bring herself to do. Even though “The Velvet Underground” is less of a full-length documentary and more of a scent that lingers for a while, evoking a time and a place, at least it’s not afraid to add a few sour notes in pursuit of a more full-bodied fragrance.