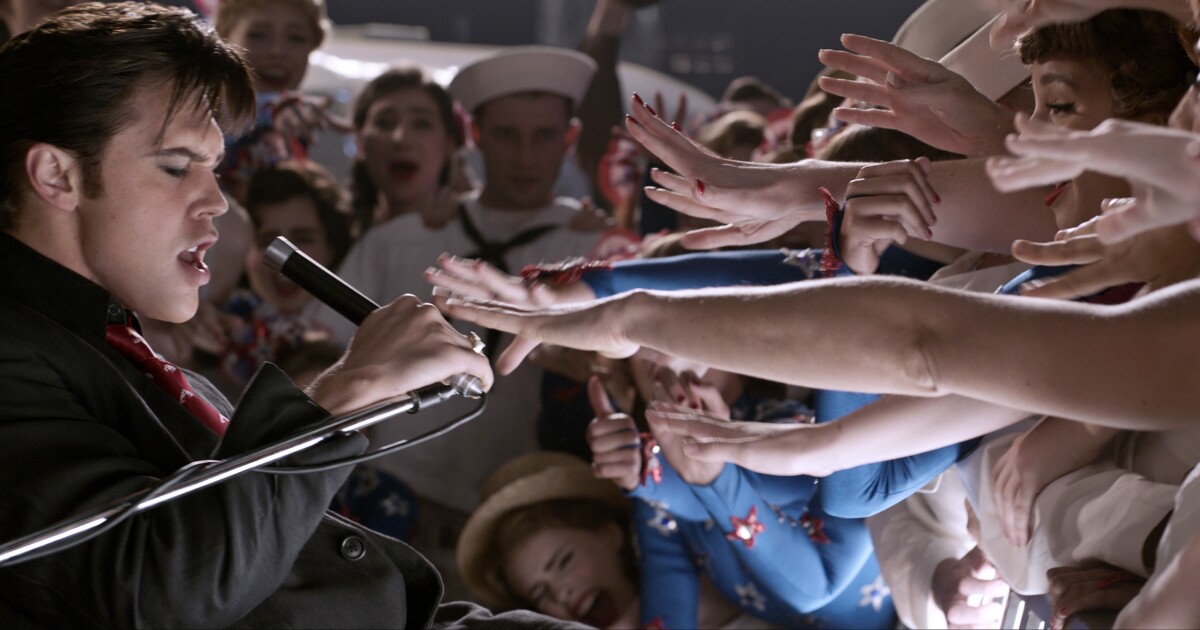 Elvis Presley never had the overseas touring career he deserved. He only played at three venues outside the United States, all of them in Canada in 1957, long before he reached the pinnacle of stardom. Instead of going international, he remained a fixture at the International Hotel in Las Vegas from 1969 to 1976, performing show after sold-out show until just a year before his death. Keeping Presley tied to Vegas was just one of the many machinations of his ruthlessly exploitative manager, Colonel Tom Parkerwho was widely believed to have been afraid to leave the United States after immigrating there illegally from the Netherlands years earlier.

This sad story is unpacked in great detail in ‘Elvis’, Baz Luhrmann’s unsurprisingly extravagant new film about the life, art and career of Presley, which had its world premiere last month at the Cannes Film Festival and will be released in US theaters on Friday. Presley may never have had the opportunity to perform for his fans in France, but Cannes gladly rolled out the red carpet for Luhrmann and his stars, Austin Butler, who makes a believable charismatic Elvis, and Tom Hanks, who makes Colonel Parker every inch of himself. – service bastard. Defensive and self-pity, Parker tells this long, wacky tale of a king and his kingmaker, arguing – halfheartedly – ​​that he’s not the villain that history has made him out to be.

The problem is that if Parker is really the villain of “Elvis”, Luhrmann has also gone out of his way to make him a co-protagonist. I usually like it when Hanks cuts against the grain of the good guy, but his work here is hammered, raspy, and unmodulated to the fault, accomplished with a combination of greasy suiting, prosthetic jowls, and over-the-top accent that makes The Penguin by Colin Farrell and Stellan Skarsgard’s Baron Von Harkonnen look positively restrained. It also adds unnecessary narrative padding to a film that runs north of 2.5 hours and would gain more time if it didn’t repeatedly force its ostensible subject to share its spotlight.

It’s a shame, because in many other ways, “Elvis” feels like an intuitive and sometimes even ideal match between filmmaker and subject. Luhrmann doesn’t do much by halves, and here his flamboyant stylistic excesses are right on par with those of Elvis. Performance footage crackles with wired energy, even when Luhrmann pulls them or even slows them down. (A blissful opening scene of a glamorous young Elvis shaking a crowd of women—and unleashing wave after wave of pink pelvic gyrations—seems to go on forever.) At times, Luhrmann will play the concert footage in sizzling black-and-white; sometimes it will divide the screen not into quadrants but into octants. It’s a bit too much, which means it’s fair.

Butler is a decent physical match for Elvis and a better vocal one. While it’s often the real Presley you hear singing in the film, the soundtrack is also replete with Butler’s recorded covers of “I’ll Fly Away”, “Blue Suede Shoes”, “Heartbreak Hotel”, “Hound Dog and “I Can’t Help Falling In Love”, among others. Efforts were made early on to locate Elvis’ musical and spiritual origins in the churches and revival tents of Mississippi, and also to confront his often disputed legacy as a performer and appropriator of black music.Key black artists seen briefly here include BB King (Kelvin Harrison Jr.), Arthur “Big Boy” Crudup (Gary Clark Jr.), Sister Rosetta Tharpe ( Yola), Little Richard (Alton Mason) and Big Mama Thornton (Shonka Dukureh).

Before long, Colonel Parker realizes the bottomless commercial potential of an artist who could “sell a black sound with a white face,” as Presley described in Eugene Jarecki’s excellent 2018 documentary, “The king.” This film clearly drew a parallel between the waste and decadence of Presley’s ignominious final years and the moral complacency and confusion of Trump’s America. By contrast, Luhrmann’s “Elvis” largely keeps politics and larger metaphors at bay; it merely tells a conventional, crowd-pleasing tale of the rise and fall of an iconic performer.

And so we see the triumphs of Elvis’ career, his meteoric rise to the top of the charts and his proud defiance of the conservative squares who tried to keep his evil dancing in check. We see his tumultuous marriage to Priscilla (a likeable Olivia DeJonge); his neglect of his daughter, Lisa Marie; and his years of struggling with addiction and depression, most of which take place in a sprawling Vegas penthouse suite that feels more like a prison with every shot. Complaining that “Elvis” is essentially a compilation of biographical musical conventions is a bit like complaining about a greatest hits album; it also lacks one of Luhrmann’s strengths as a filmmaker, which is his ability to imbue shots with sincerity, energy and sentiment.

These gifts were on display inexorably in Luhrmann’s ‘Moulin Rouge’, which kicked off the 2001 festival in style. It was the first edition of Cannes programmed by its longtime artistic director, Thierry Frémaux, and the opening night selection of the “Moulin Rouge” was a major blow that improved relations between the festival and Hollywood. , who had become somewhat reluctant in the 90s. bring studio films to the Croisette. Luhrmann would return to open the 2013 festival with “Gatsby the magnificent,” which, like most of the opening night films, was forgotten within days but nonetheless felt like an ideal starter for an event where art, commerce, glamor and silliness exist in a balance almost perfect. To that end, “Elvis” wouldn’t have been a bad Cannes opening pick this year, though I suspect Warner Bros., which has high hopes for the film when it comes out, wanted to avoid the harsher critical scrutiny that often comes with an opening night.