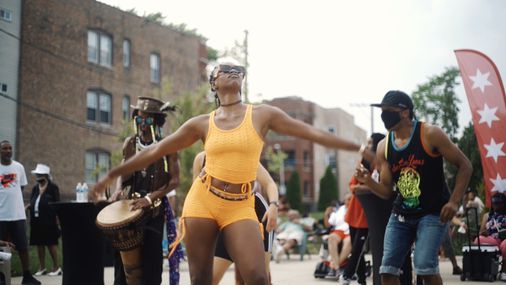 From the Arctic to South Africa and a stopover in Chicago, the eclectic and varied documentaries at this year’s Roxbury International Film Festival (June 23-July 2) celebrate the stories of people of color.

Holly Morris and an all-female film crew travel to the frozen North to “Exposure” (2021), account of a 2018 North Pole ski expedition by a diverse team of women. Some of the participants, like Misba Khan, a cheerful Pakistani-British mother and Muslim chaplain, have no experience in such endeavors; but his compassion and sense of humor prove to be the key to the mission’s success.

And they need every break possible. Polar bears roam the snowy landscapes (luckily one team member is a sniper), hidden fissures lace up the ice caps, minus-50 degrees Fahrenheit temperatures threaten frostbite and hypothermia, and nagging doubts persist as they pursue their goal of reaching the post before the spring thaw. Their success is a credit to their solidarity and their spirit; and in view of the COVID-19 pandemic, Russia-Ukraine war and the continuing toll of climate change, it is unlikely to happen again anytime soon.

Get the Big Task

Your guide to staying entertained, from live shows and outdoor entertainment to what’s new in museums, movies, TV, books, restaurants and more.

“Exposure” screens on June 29 at 8 p.m. at the Paramount Theater (featuring the short “Tuesday & the Whites”) and includes a live Q&A with the filmmakers.

The title of Adam Pertofsky Ubuntu (2022) means “humanity”, a word that sums up the spirit of the Cape Mamas the movie celebrates. It’s black women who during the apartheid period in South Africa organized nurseries, schools and other facilities for children who were orphans or left to fend for themselves by parents who had to work. The state did nothing for these children but instead imposed restrictions worsening their situation, and only the volunteer Mamas, despite their own poverty, offered any hope or help. The Mamas persevered in their service to humanity undeterred.

Ubuntu screens on June 25 at 11:30 a.m. at the Museum of Fine Arts preceded by the short films “Soul Intact” and “The Panola Project”.

As seen in Joanne Burke’s solid research “Fighting for Respect: African-American Soldiers in World War I” (2021), 200,000 black patriots who answered President Woodrow Wilson’s call to make the world safe for democracy left their segregated homeland for trench warfare in France.

US Army leaders did not want black soldiers to mingle with white troops. But 40,000 were attached to frontline French units, earning the admiration and gratitude of the French military and people.

Once back home, black veterans proved unwilling to put up with the usual injustices and drew on their military training to resist oppression. This newfound assertiveness helped advance the cause of civil rights, but also sparked a bloody backlash. The “Red Summer” of 1919 saw a grotesque upsurge in lynchings and racist violence, reaching a crescendo in 1921 with the looting and burning of “Black Wall Street” in Tulsa, Okla., by white militiamen.

“Fighting for Respect: African-American Soldiers in World War I” can be broadcast from June 27 at 10 a.m. to ten am July 2 with the shorts “Strike for Freedom” (2020) and “When I Get Grown – Reflections of a Freedom Rider” (2022) and a pre-recorded Q&A (TBA participants).

The Battles of David Weathersby “It’s different in Chicago” (2021) takes place mainly in the field of musical tastes between aficionados and practitioners of house music (originating in Chicago) and hip-hop. Some of those who embrace hip-hop reject house because they associate it with disco and gay culture. House fans hate the ascendancy of rap music. In short, you liked one or the other and preference was often determined, as Weathersby explained in an interview with the Chicago Sun-Times, by “the culture around the music, whether it was sexuality, gender and the neighborhood in which you lived”.

And then there are those who find in both genres a vibrant art form that speaks to and empowers the black community. Weathersby interviews spokespersons from all sides, includes a generous helping of both genres of music, and concludes that the differences between the two are not irreconcilable but complementary.

Peter Keough can be reached at petervkeough@gmail.com.