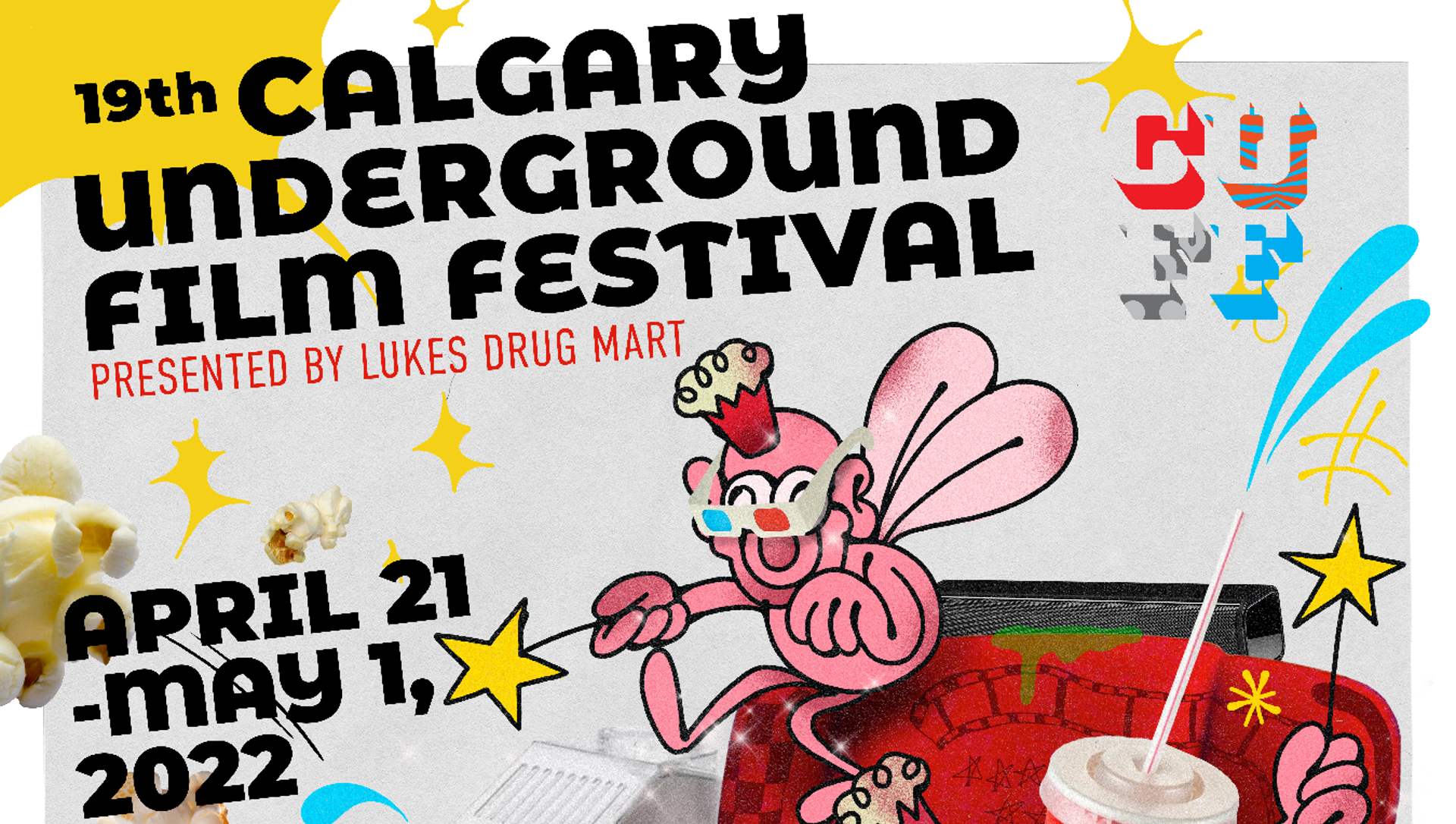 The 19and The Calgary Underground Film Festival (CUFF) is just around the corner, and today the festival unveiled some major news that will put a smile on the face of moviegoers.

CUFF 2022 takes place from April 21 – May 1, 2022. The first eight days (April 21-28) will be held at the Globe Cinema, followed by three days of online viewing (April 29 – May 1), with a selection of films from the festival available to stream on demand across Alberta. We have the full festival lineup displayed below. And the icing on the cake? This year’s event “will be a celebration of in-person cinema for the first time in three years.”

The festival kicks off with CUFF alumni Riley Stearns (THE ART OF SELF-DEFENSE) existential sci-fi thriller Double with Karen Gillan and Aaron Paul. Stearns will be present for Double Tickets for the Canadian premiere and opening night include admission to a post-screening reception.

48 HOUR MOVIE CREATION CHALLENGE: The 48-Hour Movie Making Challenge at CUFF is back. Presented in partnership with NUTV, join us for the Showcase of Completed Shorts!

LIFE ON THE FARM (Director Oscar Harding): A documentary film from rural England about a farmer filmmaker and the inspiring legacy of his long-lost home movies director produced by Joe Pickett and Nick Prueher of the Found Footage Festival.

A NIGHT OF KNOWING NOTHING (Director Payal Kapadia): A dreamlike black and white love story about two college students in India and the political system they are caught in. Winner of the Golden Eye award for best documentary at the 2021 Cannes Directors’ Fortnight.

BEYOND THE WASTELAND (Director Eddie Beiruty): A documentary featuring fans around the world who go to great lengths on behalf of George Miller’s MAD MAX.

THE DAWN IS RISING BEHIND THE EYES (Director Kevin Kopacka): A couple spend eternity in a castle until their reality begins to change. A love letter to 60s and 70s gothic horror films, it’s a crazy journey.

DOWN WITH THE KING (Director Diego Ongaro): A famous rapper disillusioned with the music industry and the pressures of being a celebrity, leaves town and his career behind to find himself in a small farming community.

DOUBLE (Director Riley Stearns): Opening night movie! CUFF alumni Riley Stearns’ satirical sci-fi thriller (2019 Secret Screening Selection THE ART OF SELF-DEFENSE) centers on a woman who opts for a cloning procedure after receiving a terminal diagnosis and is translated into court-martialed for a duel with Death when she begins to recover.

FREAKSCENE: THE STORY OF DINOSAUR JR (Director Philipp Reichenheim): A tribute to one of the most influential bands on the American east coast, who inspired and influenced the alternative rock scene of the 90s.

GATLOPP (Director Alberto Belli): After too many, four friends decide to play a drinking game, but they soon realize it’s no ordinary game, when it’s revealed that if they don’t band together not and do not face their inner demons, they will be forced to play for eternity.

RECOVER: CYMANDE’S STORY (Director Tim Mackenzie-Smith): Cymande are the unsung heroes of hip hop, disco and a host of other genres, whose message of peace, love and funk have sailed beyond British shores and helped shape music for five decades.

HOME (Director Sebastian Godwin): Nothing is as it seems when a woman visits her fiancé’s family with chilling results. A trip to the countryside becomes far from idyllic in this twisting psychological thriller.

HONEYCOMB (Director Avalon Fast): A group of young girls move into the woods, leaving everything they know behind, in this Canadian indie horror.

IUZIFER (Director Peter Brunner): Inspired by the true story of an exorcism, LUZIFER delves into the psyche of a child raised by his mother on the margins of society.

PIG (Director Carlota Pereda): Adolescence can be brutal. An expanded version of a short film of the same name, Spanish thriller PIGGY stood out in the 2022 Midnight section of the Sundance Film Festival. Read That Shelf’s review here.

SALUM (Director Jean Luc Herbulot). In this cool, kinetic supernatural thriller from Jean Luc Herbulot, a legendary trio of runaway mercenaries bearing a stolen bounty of gold and a kidnapped drug lord take refuge in a remote and mystical region of Senegal, where dark ancestral forces are unleashed. hell on them all. World Premiere, TIFF Midnight Madness 2021. Read That Shelf’s review here.

SATURDAY MORNING CARTOON PARTY ALL YOU CAN CEREAL!: In this all-new program, you’ll see both favorites and obscurities spanning the 50s through the 90s, all punctuated with vintage commercials, public service announcements and station IDs! Jammies encouraged!

SECRET SITTING: Take a seat and enjoy the surprise! The film will only be unveiled at the time of the show.

SHORTS PACKAGE – HIDEOUS HAUNTS: These dark and spooky shorts will send shivers down your spine.

SHORTS PACKAGE – PUSHING THROUGH: Unique problems call for unconventional solutions in this mix of dramatic stories.

BAR/BACK (Director Nyla Innuksuk): In a remote Arctic community, a group of Inuit girls battle an alien invasion, while trying to get to the coolest party in town. This screening is FREE for children 14 and under!

RIGHT UP AND FLY RIGHT (Director Kristen Abate and Steven Tanenbaum): In funk, physically disabled New Yorker Kristen walks dogs for a living but dreams of being a writer. When her life begins to crumble, she must make the choice to crumble or to recover.

TO SLEEP (Director Michel Franco): When a distant emergency disrupts a vacation in Acapulco, simmering tensions rise to the fore between the descendants of a wealthy British family. With Tim Rothand and Charlotte Gainsbourg.

THE CIVILIAN DEAD (Director Clay Tatum): A struggling misanthropic photographer just wants to watch TV and eat candy while his wife is out of town, but when a desperate old pal resurfaces, his plans are thwarted, with chilling consequences in this heartfelt indie horror buddy-comedy.

THE FAIR (Director Mark O’Brien): A bereaved man feels the wrath of a vengeful God after being visited by a mysterious stranger in this psychological horror in Newfoundland.

UNDERDOG (Director Tommy Hyde): A documentary about a Vermont farmer who risks losing the only home he’s ever known to pursue his dog-sledding dreams in Alaska.

WE MET IN VIRTUAL REALITY (Director Joe Hunting): Filmed entirely in the world of virtual reality, this truth documentary captures the excitement and startling intimacy of a burgeoning cultural movement, demonstrating the power of online connection in an isolated world . Read That Shelf’s review here.

WHAT JOSIAH SAW (Director Vincent Grashaw): A family with buried secrets reunites on a farm after two decades to pay for their past sins. Official selection, Fantasy, 2021.