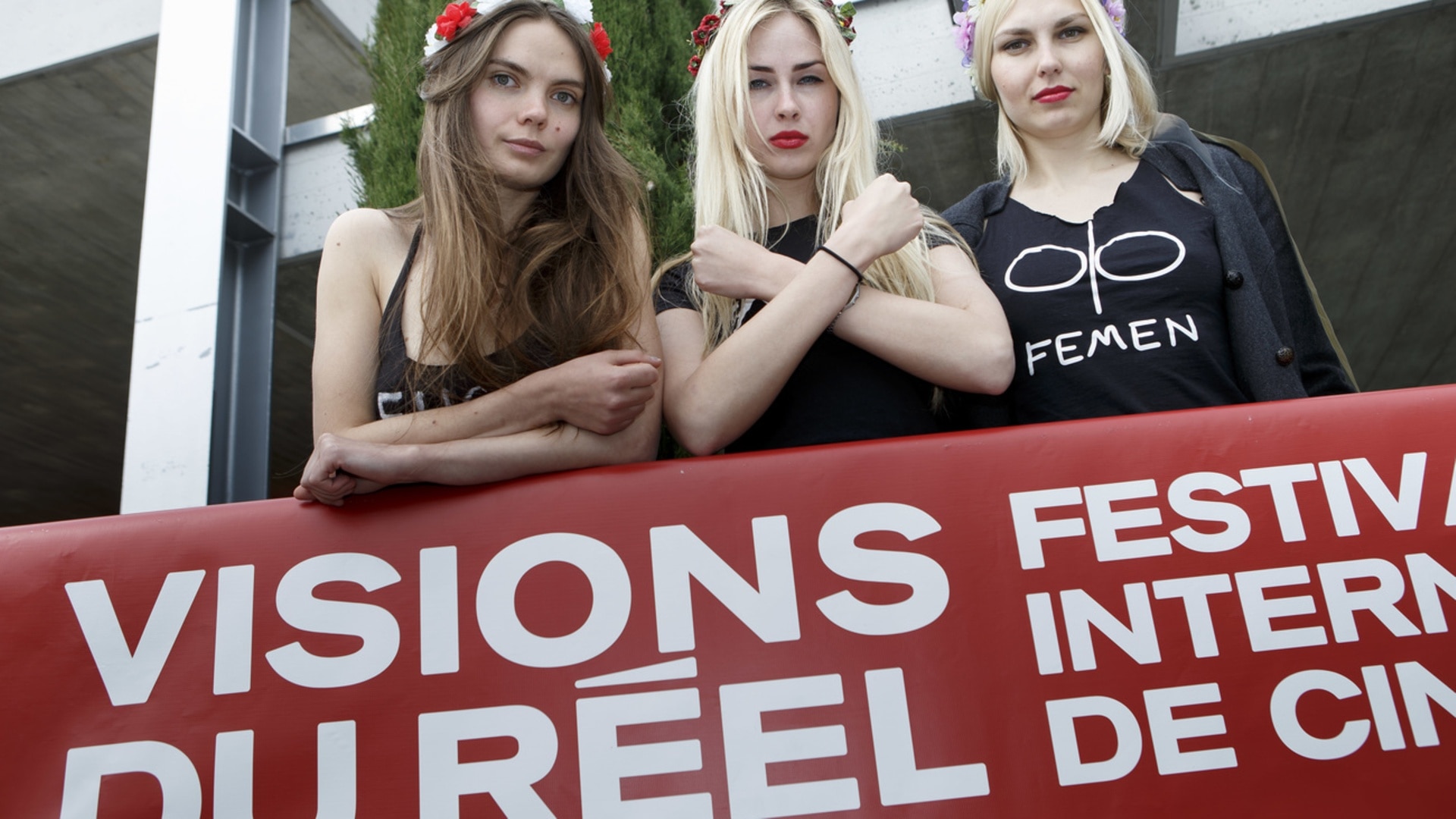 Switzerland’s most prestigious documentary film festival, Visions du Réel, which opened on Thursday, places particular emphasis on the war in Ukraine. It presents several Ukrainian productions and sets up live online discussions with Ukrainian filmmakers in the field.

The ongoing war in Ukraine is having repercussions in the world of Swiss cinema, with various events highlighting the humanitarian drama. Last month, the Friborg International Film Festival paid tribute to the country several times during its closing ceremony and the Ukrainian film Klondikeset during the 2014 Donbass war, won several awards.

The Friborg festival also organized a charity screening of Elie Grappe’s film OlgaExternal linkwhich had previously won the Swiss Film Prize in the main category, sparking a new wave of emotion among audiences as the war was brought up in acceptance speeches.

Given its commitment to films illustrating daily reality, Visions of the RealExternal link, organized in the city of Nyon, in western Switzerland, for the first time since the start of the pandemic, also deals directly with the war. The selection for the 53rd edition (April 7-17) includes four films with clear links to Ukraine.

At the last minute, the festival announced the inclusion of Mariupolis, a documentary filmed in 2016 in a city already on the fringes of the Donbass conflict, before being razed by Russian forces in recent weeks. The film’s Lithuanian director, Mantas Kvedaravičius, was reportedly killed in the besieged port city of Mariupol in southern Ukraine on April 2.

In parallel, the organizers also scheduled live online conferences called “Filming in Resistance” with young Ukrainian directors and producers based in Ukraine. The goal is to reflect and discuss with them how to resist the ongoing invasion with images that document it. The talks are scheduled for April 14 on the festival site.External link

While the lineup was nearly complete by the time the war broke out, a film was added after the war began. “We chose the closing film, The Earth is blue like an orange, specifically to show solidarity with Ukraine,” said Emilie Bujès, artistic director of the festival, during a conversation with SWI swissinfo.ch via Zoom.

“It was supposed to be our closing film in 2020, a Swiss premiere, but the pandemic forced us to go online and the film did not air. So we decided to screen it this year, in response to what is happening in the region.

Premiering at the Sundance Film Festival in January 2020, Irina Tsylik’s feature debut project has also screened at the Berlin International Film Festival, the Berlinale and other festivals, including a premiere Swiss in person at the Zurich Film Festival, where it received a special mention from the jury in the international documentary film competition.

The Ukrainian director’s film deals with conflict head-on – it centers on a family filming their daily lives as a way to cope with the trauma of living in a war zone. The tragic consequences of war on the lives of children are also the subject of Simon Lereng Wilmont’s book. A house made of shards.

Both films are stark reminders that Russia’s current campaign against the Ukrainian people did not begin this year, but is an escalation of a problem that began years ago.

In the crossfire of taboos and phobias

Someone who is well aware of this is Sergei Loznitsa, arguably the greatest Ukrainian filmmaker working today, and also the most controversial at the moment. A few weeks ago, while opposing the global boycott of Russian films, Loznitsa was expelled from the Ukrainian Film Academy. He then argued that not all Russian film directors were part of Vladimir Putin’s propaganda.

Ironically, the ban came just after Loznitsa himself resigned from the European Film Academy for his initially weak response to the Russian invasion of Ukraine.

Loznitsa, who dealt with the Euromaidan protests in Ukraine in 2013 and the ensuing Donbass war in documentary and fiction form, is part of this year’s Visions du Réel program with his film Mr Landsbergis, a four-hour portrait of the eponymous leader of the independence movement in Lithuania in 1990. “It doesn’t deal directly with Ukraine, but there is certainly a contemporary subtext,” says Bujès.

A selection of Ukrainian films is also present in Nyon for the “Opening Scenes” section, which focuses on short films from international film schools.

Shot in 2020, Olena Kyrychenko The earth rotates talks about the Ukrainian director’s relationship with her parents following the first Covid lockdown. The mother is depressed, while the father resorts to alcohol to cope with unemployment. In its own way, the 20-minute film perfectly encapsulates the transition from one major global conversation topic to the next.

Bujès agrees: “We still have a few pandemic-related films in the selection, and then this one comes, and it happens to be set in Ukraine. This is unavoidable when dealing with films that capture reality.

This will be the first edition of the Swiss documentary film festival since 2019 not to have to deal with health restrictions linked to the pandemic. In 2020, the festival was entirely digital. In 2021, it adopted a hybrid model, with online access for regular viewers and limited physical screenings for press, industry and jury members.

Bujès welcomes the return to a 100% face-to-face event in 2022, although there were still some concerns at the start of the year about the ability of the festival to continue.

As part of the aftermath of the pandemic, some films will still be available online for viewers.

The program’s focus on Ukraine is not opportunistic, says Bujès. The country would have had a strong presence at this year’s festival regardless, given its standing in the documentary world, she adds.

“Visions du Réel has always had a strong link with Ukraine,” explains Bujès. “They are a powerful and interesting voice in documentary cinema. In some previous editions, in 2018 and 2019, we had four to five Ukrainian titles on the program.

Speaking at the spring event “L’immagine e la parola” of the Locarno Film Festival held on March 12 and 13, Alberto Barbera, director of the Venice International Film Festival, said that in the near future , festivals would likely show more films about the war in Ukraine than the pandemic. Bujès agrees: “Let’s hope that the pandemic is a thing of the past, in our lives and in the cinema. As for Visions du Réel, I imagine that we will be receiving a lot of war-related submissions for at least the next two editions.

Film festivals such as Berlin, Cannes, Locarno and Venice have all taken a stance on Russia. Russian films will be admitted on a case-by-case basis, but no delegation or government-related person will be welcome as long as the war continues. “We have a similar policy,” explains Bujès. “Because we deal with documentaries, we are unlikely to select films that do not align with our values.”