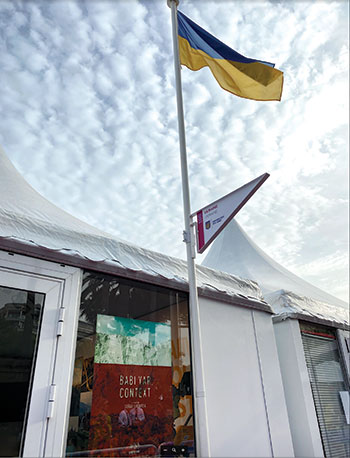 CANNES, France – After a hiatus in 2020, the 74th Cannes International Film Festival took place July 6-17 on the French Riviera with two Ukrainian films – â€œOlgaâ€ and â€œBabi Yar. Context â€- premiere at the festival. In addition, the State Agency of Ukraine for Cinema opened for the 15th time its pavilion which included the blue and yellow national flag and the hashtag #UkraineIsYourDestination in the heart of the international festival village.

“The Ukrainian pavilion at the Cannes Film Festival serves as Ukraine’s embassy in the film world for the 15th year in a row,” said Andriy Khalpakhchi, artistic director of the Molodist International Film Festival in Kiev, who was the team leader. of the pavilion.

â€œIf in the early years we were ashamed that no Ukrainian film was on the official program, in recent years, thanks to the successful work of state cinema and state funding, we can be proud that Ukraine is represented in Cannes every year, â€said Mr. Khalpakhchi.

On July 9, the Ukrainian Pavilion hosted a dinner and reception with the Ukrainian Embassy in France. Ukrainian Ambassador to France Vadym Omelchenko attended the event.

â€œMy mission is to promote Ukrainian cinema. I am convinced that this is our powerful national resource and an invaluable treasure, â€said Mr. Omelchenko addressing the guests of the evening, adding that he wished to prioritize the promotion in France of Ukrainian film industry.

â€œUkraine has enormous potential in film production. It should become our national resource. Just like the Ukrainian agricultural sector, metallurgy, digital technologies, this is what makes Ukraine famous in the world, â€said Mr. Omelchenko at the reception. “We have a huge resource, we have good locations, we have talented people – from actors to producers – and we have great potential in this area.”

Maryna Kuderchuk, Head of Ukraine’s State Agency for Cinematography, spoke about the role Ukrainian films play for the country and Ukraine’s efforts to better inform the world about Ukrainian culture.

â€œThe Cannes Film Festival is extremely important for the development of cultural diplomacy in Ukraine and the development of film production in the country,â€ Ms. Kuderchuk said. â€œThe National Pavilion of Cannes aims to present [to the world] Ukraine’s ability to develop international cooperation and strengthen its image as a reliable partner.

Two Ukrainian films made their world premieres this year in Cannes. â€œOlgaâ€, by French director Elie Grappe, shot in Ukraine with the participation of Pronto Film production, was selected for the Critics’ Week competition program, while Serhiy Loznitsa’s documentary â€œBabi Yar. Context â€was screened as part of the Special Impressions program.

Mr. Grappe’s film about Ukrainian gymnasts during the Revolution of Dignity portrays young people in a process of realizing their national identity. The film realistically portrays the emotions and social dynamics during the revolution, showing a deep understanding of Euro-Maidan by the film’s producers.

â€œOlgaâ€ was co-produced by individuals from Switzerland, France and Ukraine. The film was shot in Ukraine with the help of the production studio Pronto Film.

Mr. Grappe understands the issues of national identity and presents them through the eyes of young gymnasts. The main character, a Ukrainian woman, moves to Switzerland, while her best friend stays in Kiev. They meet at the European Championships as members of national teams from different countries. Meanwhile, their former coach joined the Russian national team.

The film skillfully details the difficulties encountered by adolescents when integrating into a new country. It delves into the complex and ambiguous understanding of what it means to confront Ukrainian / Swiss identity, and weaves into this mix the impact Euro-Maidan has had on a person “far from politics” and physically distant from Kiev. Mr. Grappe does all of this with such depth that the film serves as an accurate description of the experience of millions of Ukrainians during that fateful winter. It uses documentary images of the Revolution of Dignity.

The gymnasts in the film are impressive and become the director’s vehicle for tackling other international topics. At the same time, the director initially seems to ask himself through the film whether sport is far removed from politics, but ends up answering his own question by proposing a film that opposes Russian propaganda.

“Olga” is a film that portrays Ukraine as a prosperous and democratic country with a promising young generation of individuals eager for freedom and self-expression.

This theme was magnified by a particularly impressive rendition of Ukraine’s national anthem which was performed in a crowded movie theater at the Cannes Film Festival.

The premiere of the film was attended by Anastasia Budyashkina, the star of the film. Real-life gymnast from Luhansk, Ms Budyashkina was a student of the Ivan Piddubny Olympic College. She accidentally learned of the film’s casting during a gymnastics competition. Athletes learned that a French director was looking for a lead actress and wanted a Ukrainian athlete. Many young Ukrainian gymnasts played cameo roles in the film. The producers of the film decided to use French subtitles, which allowed audiences to hear the actors speak both Ukrainian and Russian.

Mr. Loznitsa’s documentary, â€œBabi Yar. Context â€, is a series of edited archival videos that tell the story of the massive shootings of Jews at Babyn Yar in Kiev in September 1941. At that time, the German army shot dead some 34,000 Jews in three days.

Created in collaboration with the Babyn Yar Holocaust Memorial Center, the film uses unique restored footage from Ukrainian, Russian and German archives. It documents the first months of WWII and includes images of burnt villages and prisoners of war, explosions on Khreshchatyk, and it shows the tragic events that occurred in Babyn Yar. The film producers dug up the footage and created the sound to go with it, bringing the otherwise silent film to life, giving viewers of the film a much more dramatic experience.

The film and its team were presented by Thierry Fremo, Managing Director of the Cannes International Film Festival.

At a telling moment in the press conference for the film, a reporter asked Mr Loznitsa about the government’s attitude towards the film, mistakenly assuming the director is Russian. Mr Loznitsa reacted strongly, stressing that he is Ukrainian.

In a review by Screen Daily, a UK online magazine that covers the film industry, Mr Loznitsa’s film was described as a “powerful documentary” which proved to be highly relevant.

The publication highlights the skill of the director and his team, who “perform miracles with their equipment, some of which have required extensive restoration, the results show a horrific, brutal, poignant reality: corpses strewn across a field in the day after a battle; soldiers destroying village houses with flamethrowers, faint noise in the background which could be wind or screams; Jews beaten in the streets of the city, in images that have a ghostly quality. “

Many of these images have never been seen by the public before. They were captured by German soldiers who brought amateur cinema cameras with them during the war.

“It could also explain the frightening nonchalance both behind and in front of the lens,” Screen Daily wrote in its review of the film.

â€œBabi Yar. Context â€documents the strange events of World War II. However, some of these events are presented without context. For example, residents of Lviv and Kiev are shown welcoming German soldiers with flowers, but later they are seen beating Jews in the streets. It was clear to this journalist that not everyone in Cannes understands Ukrainian attitudes towards the Soviet regime following the brutality of that regime, the Holodomor, and the many years under the occupation of the Red Army.

Mr. Loznitsa often expects viewers of his films to come to screens prepared and aware of the subject. However, in the best-case scenario, an unprepared viewer might not understand what they just saw, and in the worst-case scenario, they might leave the film with the impression that the Ukrainians were German collaborators and anti-Semites. .

Screen Daily wrote that, “as always, [Mr.] Loznitsa does not go out of his way to clearly explain what he is showing, and supposition is sometimes required; his films do not come on a plate. In this case, any ambiguity concerning the perpetrators, the prisoners, the victims, only adds to the feeling of a collective loss of humanity.

The film was commissioned by the Babyn Yar Holocaust Memorial Center, whose artistic director is Russian director Ilya Khrzhanovsky, a controversial figure in Ukraine. Mr Khrzhanovsky has been criticized for open scenes of violence and the use of contradictory cinematic methods in his art project on Soviet physicist Lev Landau, which was filmed in Kharkiv. As a result, many questioned whether he was the right fit for the Holocaust memorial.

In addition, the Memorial is built with the funds of several oligarchs, including Russians. Ukrainian public figure and Soviet dissident Josef Zissels called the project a Russian â€œTrojan horseâ€ designed to portray Ukrainians as anti-Semites and Nazi collaborators. In May 2020, 750 intellectuals called on the Ukrainian authorities to suspend construction of the Memorial.

Asked about funding and Russian participation in the creation of a memorial in Kiev, Mr. Loznitsa replied that the Russians should participate in the project. His position is that despite the war, culture should not be attacked.