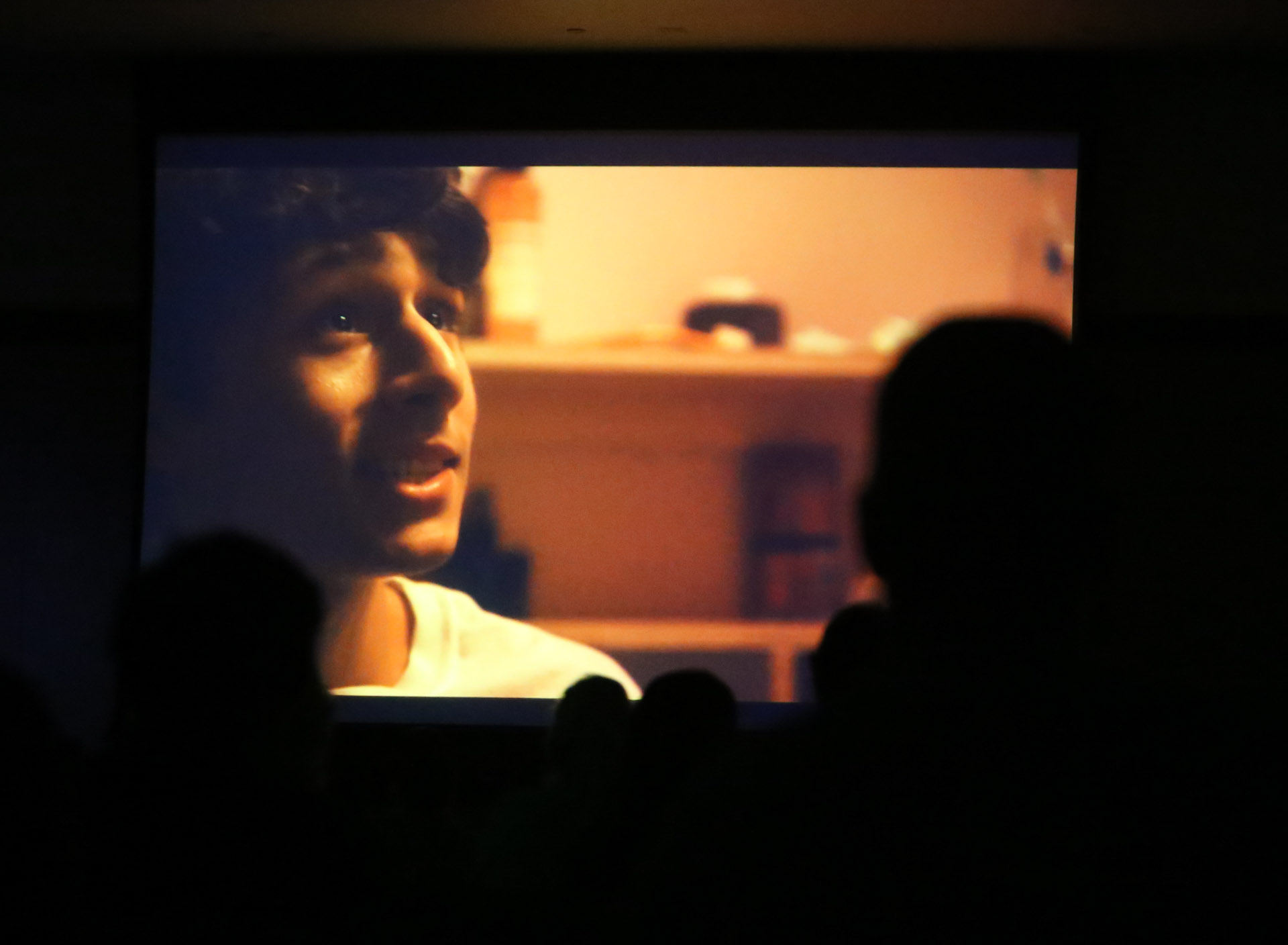 Viewers of the Wyoming International Film Festival screen the film “Tooth” as part of a “Connections”-themed block of shorts at the LCCC Saturday in Cheyenne. (Lisa Hushbeck/Cap City News)

CHEYENNE, Wyo.– Approaching a decade in its life as an annual event, the Wyoming International Film Festival seems to get bigger every time it’s held.

And among the 128 films from 18 different countries airing over four days this weekend (having started Thursday with a Sunday end date) at Laramie County Community College, it would be hard to find a moviegoer totally dissatisfied with all the options on offer.

“We can kind of track with our audience ballots how people react… [and] what i saw as [I’m] register public ballots [are] many fours, many fives. And that’s out of five,” festival executive director Rudi Womack said on day three of the event on Saturday. “So above average in the range of good and excellent.”

With a variety of shorts and features, the festival has hosted films featuring crews from all walks of life, including some who call Wyoming home, for eight years. Womack said this year’s edition is the event’s biggest yet and there are already plans to expand it even further for 2023.

The sparse and dispersed population of Wyoming — as well as the fact that the state is one of 14 with no film production tax incentives in place — can make it difficult for its filmmakers to go out and find suitable relationships, Womack said, which he noted he discovered early on while upbringing in Cheyenne (Womack is now the editor of Tiny Hero, a California-based film and television trailer company.).

That’s why he and others find the festival such an important career resource; not only does this bring Wyomingites from the film industry together, Womack said, but it also gives them the opportunity to network and learn from people from places that are hubs for quality filmmaking.

“Seeing the filmmakers in Wyoming able to interact with the directors and producers in LA or New York or Atlanta [and] ask them questions and learn more about the industry, it’s absolutely phenomenal,” Womack said.

“You’ll see filmmakers from Cody, Jackson, or Sheridan networking with filmmakers from Cheyenne, Laramie, or Casper, and they don’t get that opportunity very often. So it strengthens the film community here in the state and strengthens Wyoming as a place that can support productions from outside producers and directors.

Some of those outside workers found themselves in the Cowboy State for the first time this weekend. Jack-of-all-trades Dave Rosenberg said he traveled 27 hours from New York to Cheyenne for the Friday screening of his film ‘The Reunion’ – in which he was an actor, writer and co-creator – a project he said “means the world” to him.

The 91-minute drama, based on Rosenberg’s real-life adult encounter with a childhood bully, is available on various streaming platforms along with a trailer for the film. website. Rosenberg said this weekend marked the first festival he attended for the film without what he called his “Reunionese family,” but overall he found the experience enjoyable.

“I think someone sent me something that [said], “You know, you should get into Wyoming,” Rosenberg said. “We walked in and I was like, ‘Well, I’m on summer vacation. I will hunt. And then the welcome was great.

“It’s nerve-wracking. I sat in the back row and watched it and one person got up and walked out at some point early on, and I said, ‘Okay, hang in there mate. Hang on. … But the reception was fantastic and people really understood. They asked great questions and stayed for the Q&A, and it was awesome.

Audience participation and direct conversation with filmmakers was facilitated throughout the festival with post-film Q&A sessions, giving attendees the opportunity to immediately discuss the material they saw with its creators. . This openness, Womack said, helps build connections and benefits the state’s movie scene as a whole.

This weekend’s event may not be a world-famous film festival like Cannes or Sundance, but it is Wyoming. And Womack thinks the value of that can go a long way.

“Once they see the audience potential here in Wyoming and how audiences respond to their movies, it’s so positive that they can’t help but be drawn to the state,” Womack said. . “I’ve noticed a lot of filmmakers completely look at big markets like Denver in favor of Wyoming because we have this true Wyoming hospitality where there are no ulterior motives. We are happy to have them here. We want to show their films. We appreciate the projects they bring.